I'm moving my blog to my site!

Sorry for the radio silence but I've been busy getting a new website ready … and at last I can let you know…it's here!

I will be blogging from there now so I hope you'll come too… (NOTE: I will no longer be blogging here.)

I hope you'll follow me and join in the fun. I'm back to blogging more often… PLUS on the site you will find all manner of things--videos, trivia, randomness, inspiration and good old fashioned all round silliness...

Sally's Blog will take you right there.

CAUTION: A fish named Doreen has taken over my twitter feed… and now my blog! I cannot be held responsible for anything.

In celebration of POOR DOREEN (swimming into stores in March) I’m doing a fantabulous giveaway!

But before we get to the giveaway, introductions are in order.

Actually. Sorry. Her full name is Mrs Doreen Randolph-Potts. Ever heard of a fish with such a name? Neither had I.

And she is quite unusual. Have you ever seen a fish in a headscarf? With an umbrella? Me neither. Nevertheless here she is. 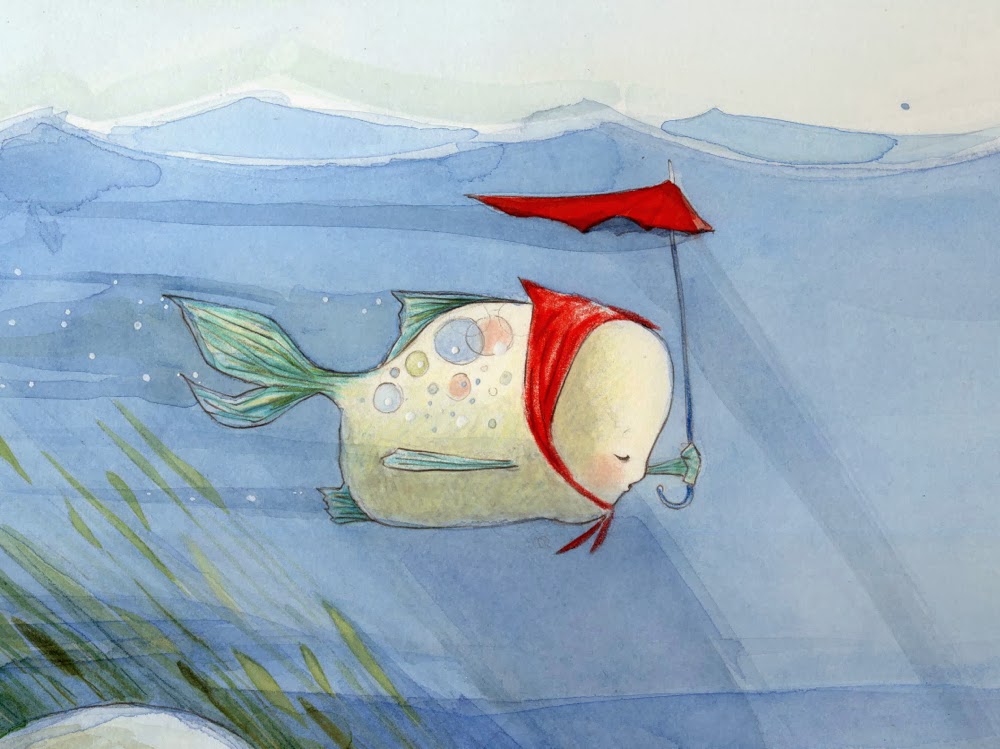 Now, Doreen is on a mission—to visit her second cousin twice removed who’s just had 157 babies… But unknown to her, she is dodging disaster at every turn on her journey upstream—oblivious to the mortal danger she is in! She remains an oblivious unfortunate fish, utterly clueless, despite the narrator’s panicky warnings along the way… like, “OH NO DOREEN! That’s not a dragonfly! IT’S A HOOK!”

Fortunately, for Poor Doreen, that’s not the end of the book or of her. (As you’ll find out when you read the book.)

FOR A CHANCE TO WIN “POOR DOREEN” I want to hear from you! Please enter 1 of the following via Twitter, or Instagram, or my Facebook page (here) and make sure to include the hashtags to be in the running -

My fish looks like this.. & I’m entering to win “Poor Doreen” #FishFace #PoorDoreen #unfortunatefish @sallylloydjones (include a photo or drawing)

The contest will run until the end of March and a winner will be chosen at random to receive a free book (you may enter more than once! You may enter 101 times! As much as you like.)

And entrants will be featured in future blogs too! Don’t miss the chance to have your fish portrait shown in a glorious fish gallery.

I can’t wait to hear from you, and to share more about POOR DOREEN in coming weeks.

A friend sent me this. So well done. And so true.

The film makers asked some children to pretend to be a salesman and a customer.

Here's what they came up with:

Is it just me? Or are spin instructors saying these profound things? Lately, as I pant and sweat and spin my way along at top speed going nowhere, I’ve been noticing there’s all this motivating cycle inspiration. (Wait! I feel a book title coming on: “Spin-Spiration”!)

How about this one?

The last 20 seconds are the most important: when you want to stop—keep going because that’s when you get stronger.

Here are some others I’ve collected:

Whatever you did before, do it better next

After all you’ve done, this is nothing

Only a specific goal gets you specific results

The hardest part was showing up

Put your heart into it—half-hearted makes no one happy

You’re competing against yourself

This is why you came here

What other Spin-Spirations have you heard?

(To be fair, back then Spaghetti was not eaten much and was rather exotic.)

Most of Britain were taken in. Even my dad - who is usually brilliant and smart - even the likes of he, totally fell for this gigantic April Fool's joke! Which just goes to show, if you have a serious and very important enough voice, you can hoodwink anyone.

What an inspiration to us all.

Ballet dancers can make floating in the air look easy, make balancing en pointe look effortless. But the only reason they only can do that is because they have spent hours and hours training, putting their body through torture. They can do it only through sacrifice and suffering.

Mastery it seems to me is making something incredibly hard look incredibly easy. Mastery hides the craft and the skill and the hours and hours that went into making it look that easy, so that all you see is the grace and the ease.

It's also true of writing. One thing I know about picture books is: if it looks easy, you’ve probably done your job. (Is that why so many people think anyone can write one?) If someone looks at your picture book and says: “WOW! That must have been SO HARD!” you've missed it. It should look easy. It should look as if anyone could do it.

In fact, if it looks like you worked on it, you probably need to work on it some more.

But don’t take my word for it. Listen to the master picture book writers themselves:

"I never spent less than two years on the text of one of my picture books, even though each of them is approximately 380 words long. Only when the text is finished ... do I begin the pictures." Maurice Sendak

"I know my stuff all looks like it was rattled off in twenty-three seconds, but every word is a struggle—every sentence is like pangs of birth. THE CAT IN THE HAT ended up taking well over a year." Dr Seuss

Years and years on a short picture book text?

Here’s a great clip from Jerry Seinfeld on how to write a joke. This one took him 2 years.

Two years on a joke?

Yup. Working on this joke Seinfeld compares to writing a song. He could just as well have been talking about writing a picture book.

Blaise Pascal apologized for writing a long letter: “I made this so long only because I didn’t have time to make it shorter.”

It takes hard work—to be simple. It takes longer—to be concise.

Short is not the same as quick.

St David (seen here in a stained glass window from Jesus College, Oxford) is the Patron Saint of Wales. In the 6th century he helped spread Christianity among pagan Celtic tribes of western Britain and he only ate watercress and once stood in the middle of a lake up to his neck--but I don't remember why.

He is famous for saying, "Gwnewch y pethau bychain" ("do the little things") but then proceeded to be canonized and do great big things.

But then again, even the greatest of all journeys is made up of small steps.

So, in honor of St David and his Day, why not do the little things today... take the next step... do the next thing.

The Blizzard came and transformed the city.

Before the snow ploughs and the footprints and the salt and the dirt could arrive, I got up early to capture it.

I stepped out of my apartment—and into Narnia. Complete with lampposts.

Everywhere, everything was brimming with light. Beauty that catches in your throat. Sudden brightness—shining in the air, in the trees, in the skies, at your feet.

Every moment a new landscape. The early pink skies and the gentle light on the snow cushions on benches. The afternoon sunlight that turns trees to crystal, and a park into an enchanted forest.

Is it the world—or our eyes, that are made new?


"Everyone begins as a child by liking Weather. You learn the art of disliking it as you grow up. Haven't you ever noticed it on a snowy day? The grown-ups are all going about with long faces, but look at the children—and the dogs? They know what snow's made for."   [C S Lewis, The Hideous Strength]

Children’s eyes are new. They can see what we have become blind to.

I would like to live every day with the eyes of a child.

I would like to step out of my apartment every day with new eyes to see what is always all around me, shining at my feet.

Sally Lloyd-Jones
new york city, United States
is a British children's book writer who came to the US in 1989 "just for a year". She's still here.